The original name of the church was St. Jakobus Kirche, the church’s German name, and the German language was used exclusively until 1904, when English was introduced into the liturgy. German continued to be used until the 1940s, when English became the exclusive lan 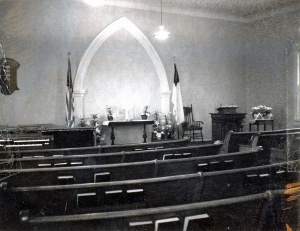 guage of the congregation for worship and business.

St James has never been strong in terms of numbers of people, and has never had enough people to be self-sustaining. The result has been various affiliations with other congregations in the area and even other church bodies.

Many other pastors served St. James as worship supply or on a part-time basis both before and after its affiliation with the LCA, notably by pastor A.F. Abele for about 15 years in the 1940s, 1950s and 1960s.

The building of St. James church has undergone several additions and modifications. First was the addition of the area that now serves as the narthex and office. In the 1950s, professionals raised the building off its foundation so that St. James’ members could dig out underneath to make a basement. Other additions included the front entryway and a rectangular apse in the back. A steeple was also added. In recent years, the floor of the worship space was completely redone, new carpeting put over it and a new altar rail added. A closet in the narthex was converted into a cry room, a new front sign and a new roof are the more major improvements that have been accomplished in recent years, all to the glory of God that this worshiping community can continue in this place for years to come.